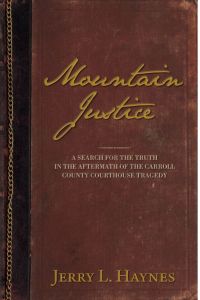 The old adage says “A watched pot never boils”, but I feel there are times when “An unwatched pot always boils over”. Such was the case in Carroll County, Virginia at the turn of the twentieth century. By 1900 the water was simmering between the mostly Democratic Allens and the Republican led court system. Cries of illegalities from the Allens against the court officials were met with claims of Allen bullying that often led to unfulfilled jail sentences. Although the Allens, and the court officials, had been in hot water before, it took a March day in 1912 for the pot to boil over and become what will forever be known as “The Carroll County Shootout”. This is the fictitious story of the aftermath of that shooting. Follow Jeremiah Haynes, a Richmond journalist, as he comes to the Blue Ridge Mountains of Virginia to “find the truth”.

A truth that no one wanted told.